Enjoying Get Running? _Please_ help us.

Just starting out with Get Running? Chat about the basics of running, what clothes to wear, where to run... anything you like!
Post Reply
5 posts • Page 1 of 1

Enjoying Get Running? _Please_ help us.

It's Benjohn here (Get Running's developer). This is a long message, sorry. It's long because I think I should explain the claims I am making, and I couldn't work out how to make it shorter. If you want to jump to the action part where you can help, that bit's easy – it's at the end.

What's going on
Get Running is currently the target of fraudulent reviews in iTunes probably intend to damage its ranking and sales. This is taking place in the United States iTunes store. Some possible motives for this action would be to help sales of a competitive App, or it may be for blackmail purposes. It might merely be a nascent gang flexing their muscle and starting to understand how the App store works before moving on to more profitable ventures.

But you can help!
If you'd like to help stop the criminals that are attempting to harm your App, it's extremely simple and will take you less time than reading this message. I'll tell you how at the end.

Why do I believe this is fraud?
I follow Get Running's reviews closely to hear what you would like to see changed and because I get a kick out of hearing about how much you enjoy it

Recently, a group of three users, acting together, have written many fraudulent one star reviews for Get Running in the United States App store. I know they're fraudulent because they criticise features Get Running doesn't even have (such as GPS tracking, a pedometer and statistics gathering).

The three update their reviews a lot with changes to their story. Often they all do this on the same day.

They also talk about crashes that no one else has ever reported, that I've never seen in testing, and that Apple hasn't got crash logs for (Get Running has had bugs and crashes, I'll admit that

but it's not had the ones they describe).

I've attached the three reviews at the end to keep them out of the way, but take a look now if you like.

Why do three fraudulent reviews matter so much?
Potential customers using default App store settings will see these three reviews ahead of all others. As many will instantly be put off by them, they are unlikely to read further and will go elsewhere, or give up on the idea of starting to run.

The reason these reviews show up at the top in the App store is that they have been voted up as being "helpful". I'm pretty sure that these three users have voted for each other's reviews. Also, other potential customers who they've put off when reading might have voted for them too, feeling that they've personally been saved wasted money and time!

Get running's numerous positive reviews do not have as many votes saying they are helpful, so they are shown below the fraudulent reviews. There are two likely reasons for this – it's got a lot of positive reviews, so up votes are very diluted. Also, potential users tend to vote for reviews that help them not to buy. Positive reviews don not get many votes.


How you can help (really quickly and easily)
• Click this link to open Get Running in iTunes. You'll need to do this on a Mac or a PC because the iPhone, iPod Touch and iPad don't have voting buttons in the App store.
• Scroll down to the Customer Reviews. You'll only see the fraudulent reviews I'm describing if you are looking at the US App store.
• Switch to "Sort By: 'Most Helpful'". This is the default setting so you might not need to do this.
• Take a look at the first page of reviews (and more if you like) and click the reviews' voting buttons to indicate if "Yes" they are helpful, or "No", they are not helpful.
• Please both vote-down unhelpful reviews (with "No") and also vote-up helpful reviews (with "Yes"). If you only vote-down the unhelpful and fraudulent reviews, they still may not go away.

Please vote as you feel is appropriate and fair. I absolutely don't want to game the App store review system and become a fraudster myself! I do want to ensure that Get Running isn't being attacked by fraudulent reviews though.

Please do help if you can because fixing this will need a large number of people to vote. Thank you very much for your time, and thank you for being a super-hero crime fighter

I'm leaving comments open and I'll reply to questions (although probably tomorrow, after some sleep). Thank you.

Here's a picture showing the three latest reviews from this team (earlier reviews from them have talked about other features Get Running doesn't have). These reviews are from the United States App store, so you won't see them if you're using another App store. 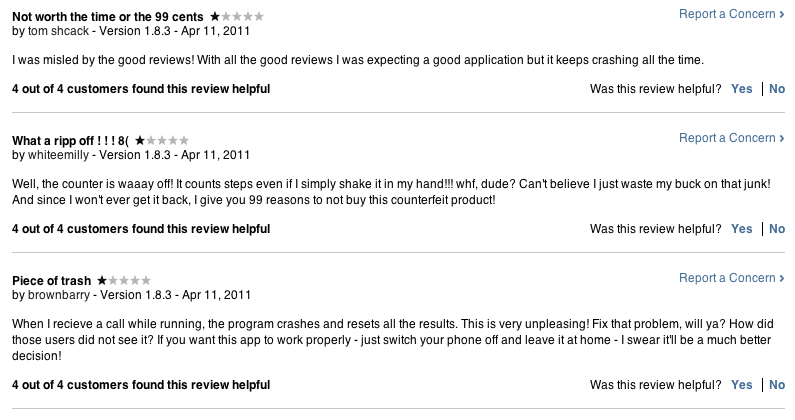 Done and voted on every review for you guys.

Thanks Brian. Apple are following this up at the moment, so hopefully these particular reviews will be taken down in due course…

Wow, that's appalling. Yes, these reviews seem utterly fraudulent. I'm on iPhone now, but will definitely have my say when I log onto a computer. This is THE best app I have. I love it! I recommend it to everyone who will listen. You deserve better!
Top

I am in Canada, so I didn't get to see the posts, but I did go into our ITunes and vote there... not sure if it helps but thought I would try

Return to “The Starting Line”