Finished Get Running? Tell us how you did, and chat with other Get Running graduates about what to do next!
Post Reply
110 posts

Finished my last 30 minute run today. I can't believe just a few weeks ago I struggled to run 3 minutes and can now run 10 times that long! Still not quite running the 5K distance, so that is my next goal.
Top

Finished my last 30 minute run today. I can't believe just a few weeks ago I struggled to run 3 minutes and can now run 10 times that long! Still not quite running the 5K distance, so that is my next goal.

Well done Anne. You're a RUNNER

Did my last run tonight. In the dark. Raining. It was wonderful! Who would have thought I would ever contemplate saying that 9 weeks ago?

I am simply amazed that I can run. I was never a runner in the past, and at 47, decided that since I seemed to be the only person my age I knew of who still had good knees, that I should give it a shot. I am so glad that this is the app I chose - there will always be a warm place in my heart for coach Claire's voice and the support I've received from my fellow runners on the Starting Line.

It's really late, and I've got to get some good sleep. After all, today is a running day

Finished: 28th November 2011
Never in a million years did i ever think i would complete this programme and be able to run for 30 mins and more

Next goals: 5k in under 29 mins regularly, did it once but nearly did myself in! Slowly, slowly catch the monkey as the saying goes.
BUPA Manchester 10k run in May 2012. Then who knows!!
Top

Finished: 10th December 2011
This plan has been life changing for me, when I first started I would never believed that I could actually run for half an hour !

I am now fit, strong and healthily. I'm much happier about my body shape and no longer feel guilty for not wanting to diet. (I'm now a size 10-12, 5'6 and weigh just under 11 stone).

This plan has also tought me that I can see things through to the end and I don't give up even when it's cold and raining !

Next goals: This morning I ran 5k in 36mins, so I want to increase my speed and then I will probably go on to the Bridge to 10k plan
Top

I haven't run since I was 19 and I put so much weight on in between those years. This app got me running for 1/2 hour non stop which was a long way off when I started. The one thing I have learned before I start the 10k app next week is to keep running 3 times a week. I was doing 5k in 26 mins when I was running 2 or 3 times a week with the app but then I didn't run much in December (I took two weeks off from week 8 and then another 2 weeks off in between run 1 and run 2) my pace dropped massively and I found the runs much harder.

This program has been amazing, in terms of what I've accomplished with it and how it changed the way I feel about myself. I've never been athletic, so going out three days a week to run was quite challenging at first, but now I find myself looking forward to it, and finding ways to be active even on my so called "rest days." My son, who accompanies me in his jogging stroller, also looks forward to our runs and will often climb into his stroller and demand to go out: when we started, he hated it! Running gives us both some quiet time outdoors, which we treasure. I cannot say enough good things about C25k and the changes it's brought to my life! 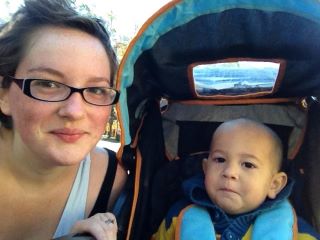 I just wanted to say that I've just taken some time to read through the "Roll of Honour" posts from everyone, and it's fabulous to see you all so accomplished and happy! Well done, one and all!

Matt
Matt. Splendid Things web guy and Android developer. Started running with Get Running in 2009. Three 10Ks and six half-marathons done since then

Return to “The Graduate Forum”